The CDC: Guilty of Ecig Scaremongering

It's common knowledge in the electronic cigarette world that public and private anti-smoking zealots have been trying to justify their illogical positions on electronic cigarettes from different standpoints, including the teenager angle using the classic gateway argument. "Vaping leads to smoking", "vaping is smoking", and countless other cheap slogans have been used to keep ecigarettes down but it's not happening. As a matter of fact, the opposite is happening. Teenage vaping and smoking statistics are moving in opposite directions but the Center for Disease Control (CDC) is not mentioning that, instead choosing only to focus on rising vaping levels amongst teenagers. Instead of admitting they were wrong to claim electronic cigarettes are a gateway product to smoking, the CDC and their ilk have brazenly continued on the same path, defying any and all scientific research.

The CDC released the most recent figures from the US National Youth Tobacco Survey in mid-April. The title was "E-Cigarette Use Triples Among Middle and High School Students in Just One Year". It showed that 13.4% of high school students reported past-month use of ecigarettes in 2014 (up from 4.5% in 2013). The CDC also said that during the same period, the rate of past-month electronic cigarette use among middle school students went up from 1.1% to 3.9%. These percentages have been singled out as a point to crucify the vaping industry, even though in the same report (in the fourth paragraph), it says "Cigarette use declined among high school students and remained unchanged for middle school students". 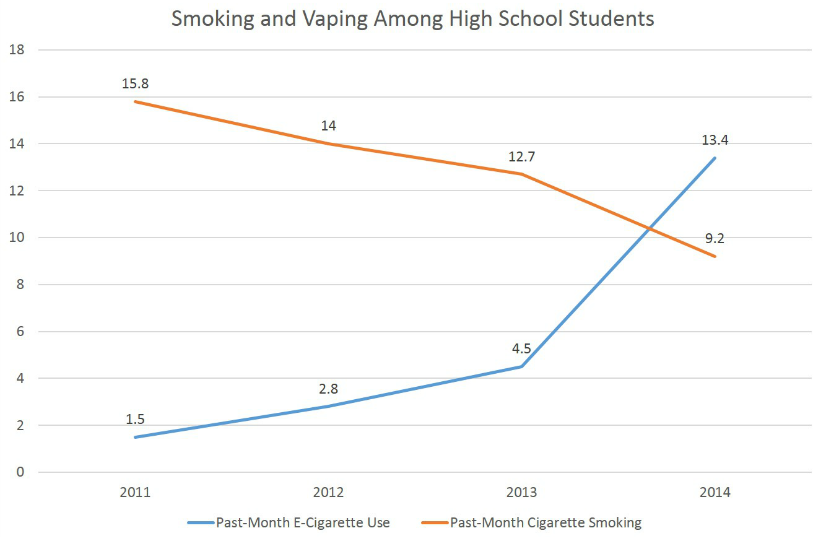 The above statement, obviously, is not what you'd expect to see if vaping really was a gateway and encouraged smoking. If anything, the data suggests ecigs are replacing and reducing the use of real cigarettes among teenagers. Looking at it from a public health window, how can this be anything but good? Still, the CDC refuses to view it in this light like the FDA, WHO, and a plethora of other organizations that simply refuse to see the good side of ecigarettes.